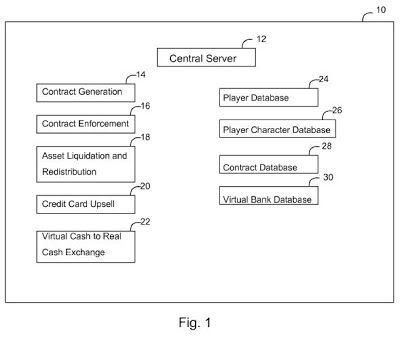 The ‘973 patent is designed to help insure a player’s cooperation and fulfillment of contracts in a video game. The invention allows a player to enter into virtual contracts in the game, contracts which are connected to a real-world bank account (through credit card information). Whenever a player defaults on a contract made in-game, he is fined in real-world money for the breaking of the contract. For all of you who get fed up with players quitting the game before a task is done, it seems this invention could be for you…if you’re willing to risk your money on your own virtual contracts.