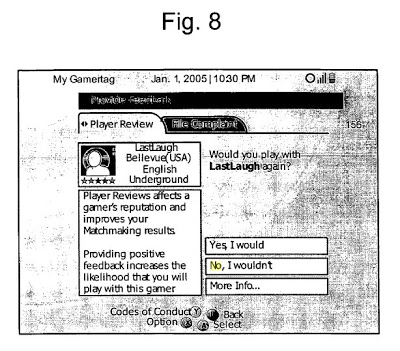 The ‘970 patent describes the Xbox Live system for matching up users during online play. A number of factors are used to match up similar players to make the game more enjoyable for all players. Factors considered are recent games played and other user’s feedback on a particular player (positive or negative). A player who receives positive reviews from recent opponents will be matched up with users who also receive positive reviews. This allows a user to play against opponents who are most likely to stay in the game, follow the rules of the game, and contribute positively to the overall gaming experience.

A matchmaking service that selects matches based on personal/social characteristics as well as skill and experience. The service takes into account direct feedback from other players about positive and negative experiences with a particular player and expectations about appropriate conduct and type of game being played before a player joins the game session.