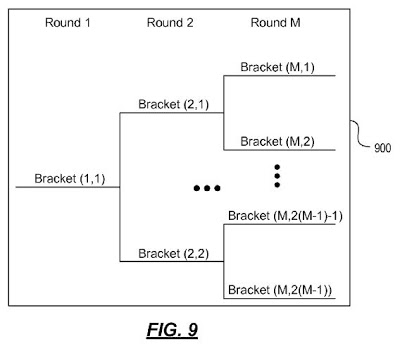 The ‘251 patent provides for a way to set up online tournaments in video games. The tournament is set up as a bracket (think March Madness-style) where the winners advance to play other winners. The system allows for players to join the tournament at any moment until the first game has started. Once the first round has begun, players are prevented from joining the game until the next tournament is established. Matched players may play their game any time they desire as long as their opponent is online and ready to compete. This system allows players to play their opponents as soon as both players have advanced to the next round. By giving players the freedom to play (and not having set match times), players can come and go as they please and set the game time for convenient moments. The invention here seems like it could be an enjoyable way to play tournaments. After all, who doesn’t love a good playoff (NCAA football committee excluded)?