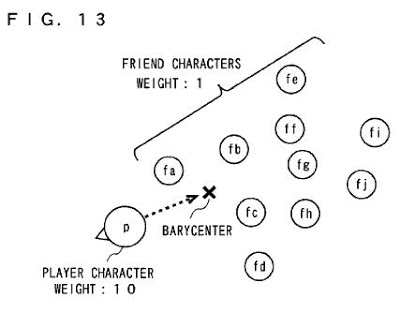 The ‘015 patent attempts to fix a common problem experienced by most gamers. In past games when the camera is placed directly behind a character, the player had a hard time seeing friends or enemy players unless they were in front of the character. The current invention describes a method that allows a player to spot other players or enemies with greater ease. The system gives weight to each character in a game and then attempts to balance out the weights so that all characters can be shown on the screen. The user-controlled character is given the most weight and the camera will attempt to place him in the center of the screen when possible. Friendly characters (controlled by other users) are given the second most weight and the camera angle will attempt to fit them into the screen at all times as well. Lastly, enemy (computer-controlled) characters are given the least amount of weight and the camera will place them in the view if possible, but will not drastically change the angle to accommodate them. Under this invention the camera should make playing with friends easier and should help make them game more enjoyable.