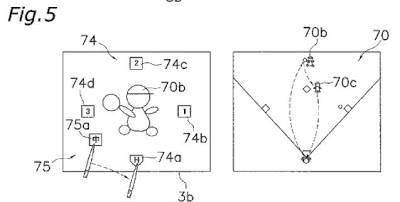 The ‘356 patent describes a hand-held baseball game with interactive fielding and throwing options. In past baseball games, whenever a fielder caught the ball, the player had to press a button corresponding to the base he wished to throw the ball. Users were apt to make errors and press the wrong button in their haste. The ‘356 patent aims to reduce this error by allowing a player to press a button which corresponds to a relay player. This character will catch the ball after it is released incorrectly. Once the relay character has the ball, the user can choose the correct base to throw the ball.