U.S. Patent No. 7,717,781: Apparatus and method for controlling clearing in a falling object game with a sequence bar 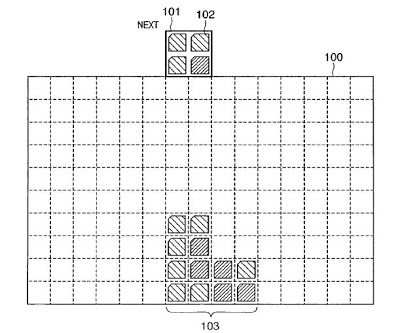 The ‘781 describes a computer game similar to other “falling block games” like Tetris or Columns, in which the player operates a falling object that falls in a predetermined area. The ‘781 patent differs from previous falling block games in that, unlike previous games, the blocks do not disappear immediately after a predetermined condition is met. Here, the objects are cleared after a sequence bar has passed. The sequence bar moves vertically or horizontally in sync with a music output to make the game more enjoyable for the player. The game described under the ‘781 patent also allows for unusual patterns to meet the clearing requirement. For example, if the blocks for the shape of a dog, that will be an acceptable pattern which will be cleared whenever the sequence bar moves past it. By adding these new patterns for clearing, the makers hope to keep the player entertained in new and exciting ways.