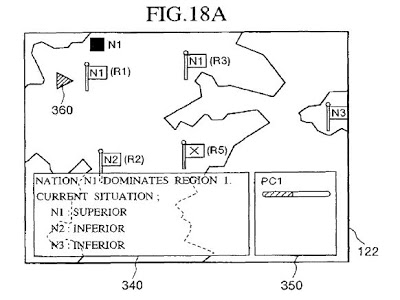 The ‘895 patent provides for a game which includes a world map including multiple regions. The game allows players to compete against other players. Each of the players selects a character which belongs to different nations. The players connect to a network and communicate with other during competitions. Points are totaled during the game according to victories and accomplishments achieved by the players. Different tasks in the game are allotted different points. Thus, a player has the opportunity to achieve a higher point award by accomplishing one task, while receiving fewer points for completing another. Players may join together in order to earn more points during the course of the game.