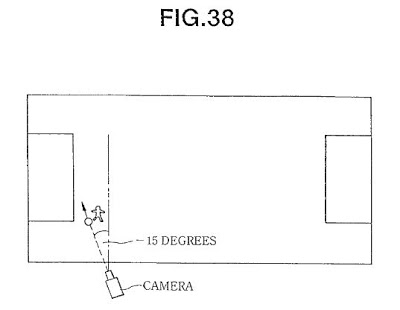 The ‘211 patent allows games to have a more realistic and life-like feel to them because the movements of players have been redesigned to simulate those of actual opponents. The virtual camera is designed to provide alternate views of the action based on what is going on during the event. Whenever there are a lot of characters on the screen at the same time, the camera will be pulled out so that the most action can be seen while the player competes in the game.

Games are processed in a more realistic and immediate manner during image processing for soccer games and the like. Specifically, the movements of characters more accurately simulate those of actual opponents, resulting in greater game realism.The invention is an image processing device for imaging and displaying the behavior of characters modeled on opponents in virtual three-dimensional space. It is determined (S21 to S24) whether or not there exists a certain situation in which the relation to the game contents (in the centering area, for example) or the positional relation (such as distance) between characters and a target (such as opponent characters or the ball) having a relation through the game to said characters matches certain conditions, and the eyes of the characters are directed to the target (S25, S26, S28, etc.) when it is determined that the certain situation exists. The invention is especially suitable for soccer games.