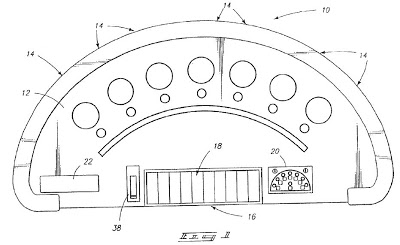 The ‘982 patent describes a method for playing blackjack against a computer opponent. The computer deals the cards to all the players at the table and then to itself. A player is then able to ask for other cards or stick with the originally dealt hand. If the player’s hand exceeds a total of “21,” then the computer wins as long as its cards are under that amount. If the computer exceeds 21, however, but the player does not, the player is the victor. The current patent allows this common card game to be played on a network or on an electronic machine where the computer is programmed to exceed the total of 21 a certain amount of times.

A blackjack or other card game system having a plurality of player counters which count the blackjack hands or other player jackpot tally events dealt to players. The system also includes at least one dealer counter which counts the number of bust hands of the dealer or other dealer jackpot tally events. Displays are included for both the dealer and players to indicate the counts. The counters are typically zeroed at the end of each hand if a tally event has not occurred. Jackpots are awarded when the tally counts exceed predefined thresholds. A tabletop retrofit game system is shown for mounting upon blackjack tables. A special round of play having modified rules can be used as part of the jackpot award.