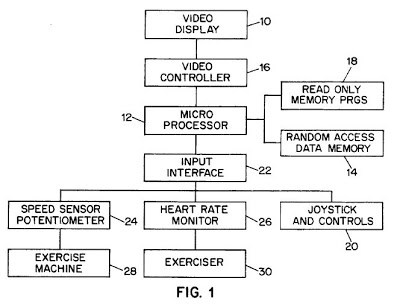 For all you health nuts out there who don’t enjoy going to an actual gym to get your workout, the ‘728 reissue patent may interest you. It describes an exercise device (it can be a treadmill, bicycle, or climbing device) which monitors a player’s activity level and heart rate and will play through the game based on these vital signs. One game type exemplified by the patent is a Pac-Man type game where if the user’s heart rate drops below a predetermined point, the ghosts will move faster toward the user-controlled character, forcing the player to peddle or walk faster to avoid them. Once the player’s heart rate is determined to be above the minimum desired rate, the ghosts will slow back down to their normal speed. Interesting concept; is this what they had in mind: 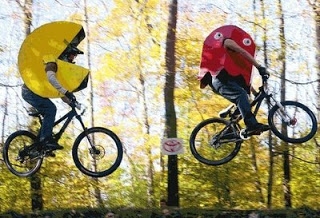 An exercise device, such as a exercise bicycle, is connected to a speed sensor indicating activity level, e.g. speed of the bicycle. The activity level signal, along with a heart rate signal, are provided to a video game, such as a Pac-man type video game. The game monitors the heart rate of the exerciser. If the heart rate falls outside preset minimum or maximum limits, a certain action occurs in the game, such as an increase in speed or skill level of the opposition. In the Pac-man type game for example, should the heart rate fall below the desired workout rate, the villain (the goblin) would move at a speed faster than the players’ speed, putting the player at a disadvantage. The player would respond by increasing his level of physical activity, thereby increasing the heart rate until it exceeds the minimum aerobic level required, at which time the villain’s speed would return to its normal level.

an exercise device for aerobic activity;

means for sensing the activity output level of said aerobic exercise device, and for outputting an activity level signal having a characteristic indicative of said activity level;

means for sensing the heart rate of the user;