U.S. Patent No. RE33,662: TV animation interactively controlled by the viewer 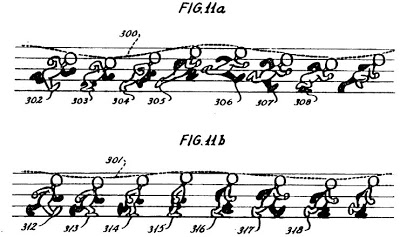 The ‘662 reissue patent provides for a motion picture branching method where the animation on the screen is controlled solely by the actions of the player. One described use of the patent involves a player swinging a racket toward the screen to control his character to connect with a ball in mid-air. Once the character hits the ball, it heads toward the opposing player (computer or human) who can then hit the ball back. The flow of the game is not set and is fully determined by the decisions of the player. The animations described in this patent are all on multiple tracts which play out based on the decisions of the player, not from a pre-defined route.

The motion picture branching method is superseded by an animation method which enables rapid and repeated switching of multiple tracks of different camera-originated animation of the same character during continuous action in a scene, and enables branching at the termination of an action to multiple actions or scenes. This method is the basis of a double-circuit video system that enables a player to repeatedly touch or hit an animated character during a continuous action as displayed on a projection screen or television monitor and thus change the action repeatedly. Another system embodiment enables the player to swing a racket before the screen or television monitor, hit the mid-air projected image of a perspective ball animated action, return the ball back to the animated character opponent, and play a simulated game during the the player exercises the same skills used to play the game simulated. An ultrasonic transducer of a playing instrument and a microphone combination on the television face or at angles to the playing action produces a readout of the television product position or the mid-air position of the playing instrument relating to the game. The readout signal is converted into digital form and compared to a similar readout in digital form of the position of the character or object in the frame of the animation displayed by the television and digitally coded in the video tape or disc.

1. A video game system providing repeated switching of multiple tracks of different actions of the same animated character according to the skill of the operator in contacting the camera-originated animation display, comprising:

a video-audio input terminal providing means to operate multiple tracks of animation, providing for the switching thereof during operation, and providing for film track selection, masking, and centering to the full raster,

a player input terminal including a playing instrument deployed before the display with a transducer and a microphone combination mounted on the mutually perpendicular sides of the face of said monitor, providing means for producing digital signals representative of the two coordinates of the location of said playing instrument with respect to the image on said monitor,

means of entering a table of values representing digital coordinates of the locations of animation targets per frame and means for entering episode cueing (cuing) data into memory storage at the start of the episode,

means of retrieval of said digital coordinates of the location of said target area at a designated frame from the memory storage,

means of processing and dispatching to effect the switching of multiple tracks of animation to the said video-audio terminal based on the said determined category of proximity obtained by the comparison of the location of said playing instrument transducer to animated target area and frame cueing from said memory storage,

continuing means of processing and dispatching for instructing said video-audio terminal to re-wind multiple tracks of animation to another episode determined by means of random choice or player input at the termination of an episode.