U.S. Patent No. 6,733,383: Systems and Methods for Simulating Game State Changes Responsive to an Interrupt Condition

U.S. Patent No. 6,733,383: Systems and methods for simulating game state changes responsive to an interrupt condition
Issued May 11, 2004, to EA 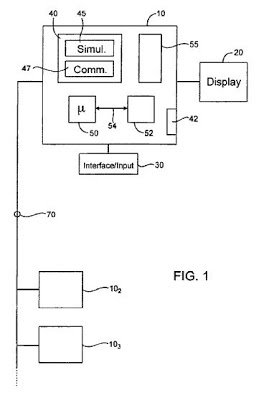 The ‘383 patent provides a system in a racing game where the player can simulate either the whole race or a portion of the race. If a player simulates a race (or only a portion of it) the game will calculate the probability of certain events and, using real-world statistics, can simulate the most realist race possible. The computer randomly generates common racing events such as crashes, spinouts, and debris on the track. Each of the computer-controlled drivers have their own attributes (based on the real-life racers they are modeled after) which ensures that each car acts in its own way during the race. Thus, each race will be different depending on what situations arise. A player has the option of simulating the whole race before the race begins, but he can also manually race for part of the race and then simulate until the end if he needs to move on and does not have time to complete the race.

A simulation module simulates events that may occur during a cautionary period based on, e.g., current relative position of vehicles, vehicle and driver attributes and current game statistics for vehicles, and compiles new statistics and attributes that are used in the resumed race. A full race simulation option and a partial race simulation option are also provided. For example, in a season mode, the simulation module simulates events that may occur during a race and compiles statistics that can be used later, e.g., in a later race, for season standings, etc. A complete race may be simulated, or a partial race may be simulated, for example, if a user desires to terminate a race before it is finished, using the compiled statistics, and a new set of statistics compiled to track the simulated race events. Real world statistics are imported and used in some aspects. For example, real world standings, performance statistics and attribute information are stored in a database and are used as a basis for AI-controlled vehicle performance and AI-generated simulation results.