U.S. Patent No. 7,097,559: Game system and method for assigning titles to players based on history of playing characteristics

U.S. Patent No. 7,097,559: Game system and method for assigning titles to  players based on history of playing characteristics
Issued Aug. 29, 2006, to Konami 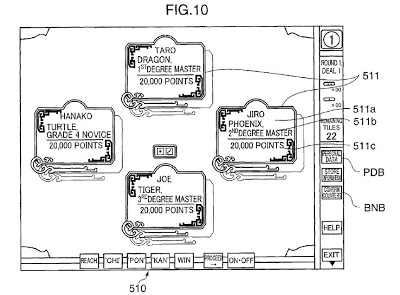 The ‘559 patent comprises a performance determination unit that determines the order of finish of the players each time an online game is completed. At the end of each game, the system tallies who won and who lost. With this information, the system then ranks all the players according to their in-game performance. The players’ information is then stored on the server so that running totals of wins and losses as well as other statistics are constantly kept. This allows players to then be matched up based on certain criteria (winning percentage, completeness of levels, etc.) and can provide players with competitive teams.

The CPU 161 of the video game apparatus comprises a performance determination unit 161b that determines the order of finish of the players each time a game is completed, a parameter calculation unit 161g that calculates parameters indicating the characteristics of each player in playing games based on the game history data stored in a history storage unit 162b described below and a title assigning unit 161h that assigns a title applicable during games to each player based on the calculated parameters, and the RAM 162 comprises a history storage unit 162b that stores past player game history data for each player, and a title storage unit 162c that associates the titles assigned by the title assigning unit 161h with the players and stores them.