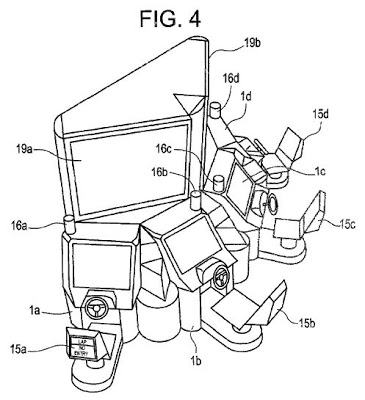 The ‘577 patent describes a racing game which allows players to join and leave the game at will without affecting the other players’ experience. The racing game is an endurance race where many vehicles run for long periods of time. Since the vehicles are continuously running on the track, a player can select a vehicle and join a race in progress. Players receive points based upon the number of cars they can pass. Thus, since points are awarded based on personal achievements the player is not hindered by other players joining mid-game. Whenever a race is completed the players are ranked based upon their finishing positions. A player who wins a race is considered a “survivor” and will keep his place in the race whenever a new batch of competitors joins. Players who finish in other positions may be kicked from the server because of their poor performance.

An object is to provide a free-entry type of race game apparatus wherewith a player can join at any time. This is a race game that simulates an endurance race in which many vehicles run for a long period of time. The vehicles are continually running on the track (ST 1), from which number a player selects any vehicle at will (ST 3) and joins the race in progress (ST 4, 5). The game is terminated on the basis either of a pass count indicating the number of cars passed (or passed by) (ST 6), or a limiting time (ST 7).