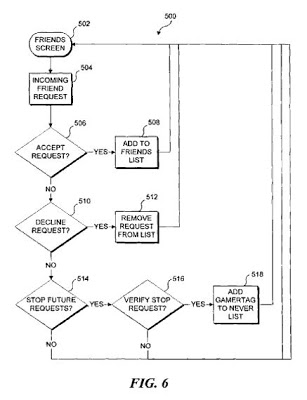 The ‘608 patent describes a method for enabling a user to load a game and to automatically join an online game with a friend selected from his friends list. Ordinarily, when friends want to play together they must have the same game loaded. With this invention, however, a friend can join another friend on his list without having the same game loaded. If the friend wants to join a game that he does not have the disk for, the invention allows him to download the game to his hard drive where he can then play the game.

A user who has signed on to an online gaming service can send an invitation to a friend appearing in the user’s friends list to join in playing the game the user has loaded or may join the friend in playing the game being played by the friend, regardless of whether the game title played by the friend is the same as that loaded on the user’s game console. If the game titles are different, the party needing to load the game title to be played is prompted to do so, and then prompted to reboot the game console. Information written about the new game to be played is automatically written on the hard drive of that party’s game console and automatically accessed after the reboot for use in expediting the log-in process of the player who had to reboot.