U.S. Patent No. 7,240,093: Use of online messaging to facilitate selection of participants in game play

U.S. Patent No. 7,240,093: Use of online messaging to facilitate selection of participants in game play
Issued July 3, 2007, to Microsoft 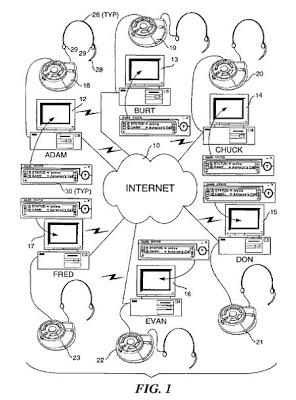 The ‘093 describes a system for selecting participants in multiplayer online games. The invention provides an efficient way for players to host and join new multiplayer games. Players can look at a list of friends and see who is online. From there they can send invitations either through a voice or text message to the friend inviting them to play. Players who receive an invitation can either accept or decline. If the player accepts they will immediately be placed either into the game the host is playing or into a lobby with the host while waiting on other friends to join. All players can communicate to each other if they have a separate headset.