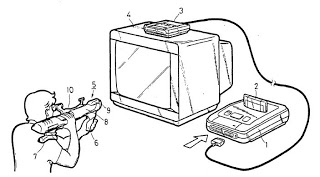 The ‘192 patent describes a shooting game system for shooting targets. The system uses a controller for shooting which features a scope and a trigger. A photoelectric converter converts light which shot an electric signal towards the television, thus allowing a player to shoot a target on the screen. Whenever a player hits a target, the target is changed and reacted in whatever way it was designed to do after being struck.  This is one of the older “light gun” patents around.

1. A shooting game system for shooting a target displayed on a raster scan type display in a position spaced apart from the display to play a shooting game, comprising:

game processing apparatus being connected to said display for performing processing for the shooting game;

a shooting scope, having a light receiving axis, used in a position spaced apart from said display for shooting the target displayed on said display; and

a photoelectric converter for converting light from a position which is shot on said display into an electric signal which is synchronized with raster scanning of said display, and

reference mark display controlling means for displaying a reference mark in a predetermined fixed position on said display before starting the game,

a target display controller for displaying the target on said display while the game is played,

hit judging means for making a hit determination in a case where said target is shot by said shooting scope on the basis of said relative positional relationship after being corrected by said correcting means.