Sega of America v. Fox Interactive et al.
N.D. Cal., Filed Dec. 4, 2003, Settled in 2004
In December of 2003, Sega brought a lawsuit against video game publishers Fox Interactive (now part of Vivendi Universal) and Electronic Arts and developer Radical Entertainment for allegedly using technology from Sega’s U.S. Patent No. 6,200,138 (“the ‘138 patent’) in their video game The Simpsons: Road Rage.
The ‘138 patent, which was issued in 2001, claims a “game display method, moving direction indicating method, game apparatus and drive simulating apparatus.” Below are a couple representative claims:
1. A game display method for displaying a game in which a movable object is moved in a virtual space, comprising the steps of: setting a dangerous area around the movable object; and when a character enters the dangerous area, moving the character in a direction in which the character is moved away from the movable object.
7. A game display method for moving to a destination in a virtual space a movable object which is moved in the virtual space, comprising the step of: displaying at a prescribed position in the virtual space a virtual object which indicates a direction from the prescribed position to the destination.
The main concepts of the patent include:

Sega’s game Crazy Taxi, released in 2000, required players to act as a taxi driver and earn money by performing extreme stunts and shuttling passengers to their destinations as quickly as possible. The Simpsons: Road Rage was released in 2001 and features similar game play of racing to get passengers to destinations and completing missions to collect money. Sega brought this lawsuit at the end of 2003 claiming the defendants’ game was an obvious rip-off of Crazy Taxi because it copied certain gameplay elements such as using arrows to direct the player where to go and having pedestrian characters jump out of the way of cars.

Sega alleged the game was designed to “deliberately copy and imitate” Crazy Taxi and cited game reviews that noted the similarities between the games to support its accusation. One such review called Road Rage a “shameless incident of design burglary.” An author from shacknews.com noted that many lawsuits complaining about knock-off video games are “groundless” but that he knew “several people who said that Road Rage is so much like Crazy Taxi that until [he] told them otherwise, they assumed it was licensed from Sega.” Look at the screenshots below to compare the games yourself: 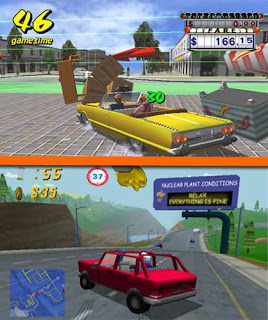 Sega asked the court for an injunction to stop the sale of Road Rage and for lost profits, which would have been a substantial figure given that Road Rage had sold over a million copies since its launch. The parties settled during private mediation soon after the case was filed, before any claim construction, for an undisclosed amount. Therefore this case set no precedent, which is unfortunate because it would be interesting to see how the court would have interpreted Sega’s patent claims.
Other Opinions
GamesIndustry recognized the effects a court ruling may have had on the gaming industry: “Gameplay patents could arguably encourage more innovation in games and stem the flow of staid clones which follow on from every successful original title, which would certainly be a good thing. However, certain other less pleasant possibilities also arise from a verdict in Sega’s favour in this case. Imagine a world where Bungie had patented the Halo control system – generally agreed as the logical best solution to controlling FPS games on console joypads. Other developers would be forced to adopt different and almost certainly inferior control mechanisms; and the person who really lost out in the end would be the consumer.”
GameSpy had similar concerns: “The bigger question, I think, is whether a company can lock down a game-design style for its own… The implications could be staggering, though. Imagine if the maker of the premiere first-person shooter claimed that id Software’s Wolfenstein/Doom/Quake games and Epic Games’ Unreal (Tournament/Championship/et al) were ripoffs and had to pay. Countless such suits could be filed against every genre going back to Pong.”
So it’s interesting to consider if claims like those found in the ‘138 patent are really what patents were really meant to protect. GamaSutra says otherwise. Even though the two games are undoubtedly similar, “the concept of driving around in a city where virtual people jump out of the way of your car is not exactly what Thomas Jefferson had in mind when he said that patentable inventions were to be new and useful, and you can forget about non-obvious. I also don’t think he’d be too happy that no one can make a game where you drive a car around a city with virtual people who jump out of the way…FOR TWENTY YEARS. The big picture of protecting the R&D of entrepreneurs is certainly not served by patents like [the] ‘138 [patent].” The author doesn’t see “how they could stand up in court because they blatantly fail the test of ‘non-obvious to a person of average skill working in the field at the time.’”

If I (Ross) were a betting man (oh yeah… I AM a betting man), my money would be on invalidity. Just take a look at the last independent claim in the patent:

Really? Really?!?! Does Sega believe it is the first game to “emphatically display” an object to which another movable object can navigate? Yeah, I bet Fox settled cheap…